“In everything, almost in everything, I wrote I was guided by the need of collecting ideas which, linked together, would be the expression of myself, though each individual idea, expressed separately in words, loses its meaning, is horribly debased when only one of the links, of which it forms a part, is taken by itself. But the interlinking of these ideas is not, I think, an intellectual process, but something else, and it is impossible to express the source of this interlinking directly in words; it can only be done indirectly by describing images, actions, and situations in words.”
― Leo Tolstoy
I was reading this quote and thinking... Dan-Dwayne, you have 150 pages written on your new Novel. It's rough right now but it has murder, adventure, suspense, romance, humor, and intregue. All the things I like to write about. As I see it... I'm about half way there. When the first draft is all on paper, so to speak (Flash drive for us in this century) It's rewrite... develop and flesh out the characters and increse the intensity of the drama. To quote Ernest Hemmingway - “The first draft of anything is shit.” Sadly this is true from a technical point of view. The thing is even Mr. Hemmingway had to have a first draft of his phonomonal literatary works. Yes, everyone must have a first draft or the final cut will never appear. It's what we learned from all the other first drafts we had that can make a difference in the quality of the next story. Notice I didn't say sucess... Success depends on what the people (the readers) decide to do with it. 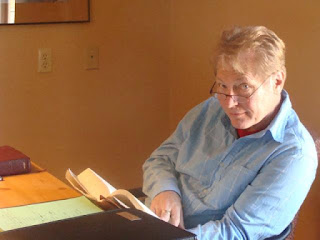 Posted by Dan-Dwayne Novelist at 1:25 PM