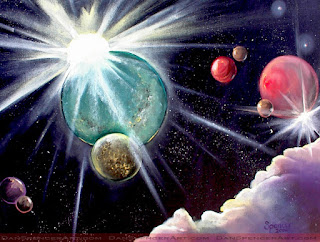 Usually I share a drawing with my readers. This time I'm sharing a painting. The title of this one is "A New Beginning." It's depicting the first rays of morning light on the blue-green planet. We are not seeing this phenomenon from the horizon of the planet's surface but from far in space. A view only seen by God. Stay with me as I explain; by showing you the first light of day on the planet in this manner I am empowering you with the vision of God (or so it seems.) Empowerment is an important thing. It is the critical part of child raising that allows the child to stretch their horizons, or some would say, broaden their sails until the time they are ready to launch into the world. Then there is such a thing as self empowerment. Self empowerment allows you to start healing emotionally. Too bad we don't take that empowerment away from those who caused the pain. If we stop giving them power over our feelings then they cant hurt us. In my story/novella "Spies Lie & Spies Die" (published in my book by the same title) the character of Phineas King has separated himself from his first love, a high school sweetheart named Angie. He has never recovered from their relationship. He proved it when he confesses that he has kept her number (even though she has changed jobs.) He knows exactly where to get in touch with her and what her new phone number is. In the most primitive way he has never taken away her power over his feeling. He has tried to make a break and have a new beginning but he is tied to his past. Will that effect how he completes his mission for the NSA? Will she become a liability or an asset? If you haven't read my book "Spies Lie & Spies Die" check it our on Amazon. You'll like it.       .

Posted by Dan-Dwayne Novelist at 5:17 PM