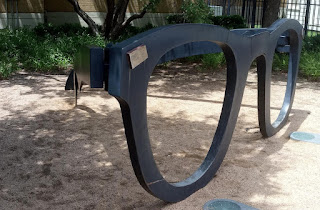 Here in Lubbock, we love our favorite son... Buddy Holly. We have a Buddy Statue, a Buddy Museum, and we have even moved the Allison House (Where one of the Crickets lived) to the museum grounds. (Funny they didn't move Buddy's old house too. It was just down the street from the Allison house.) Anyway, All to say that we love Buddy, his music, and his band (The Crickets). I guess you might say we've made him bigger than life. Here you see enormous Buddy glasses (a sculpture) which sets just outside the Buddy Holly Museum. I suppose being larger than life has it's advantages and it's disadvantages too. It would make it hard to fit into everyday society. I mean if Buddy was alive there would be people swarming to get his autograph and such... and imagine the paparazzi. Then I'm pretty sure he wouldn't be living in Lubbock Texas. As I understand it he had moved to New York or somewhere before he died. Why... you ask? Because Lubbock just didn't get his music. Some liked him but some really didn't. That is the way of things. Pardon the paraphrasing but I think that even the Bible says that a prophet is not respected in his own country. There is no denying that Buddy (and his band too) was a fantastic entertainer, songwriter and what some would call a poet. The Plains of West Texas has produced many musical talents like Waylon Jennings, Mac Davis, The Gatlin Brothers, Natalie Maines of the Dixie Chicks; and Actors too like Woody Harrelson, Barry Corbin, and Chance Crawford (best known for his role in Gossip Girl.)   But, Let's not forget the famous (and semi famous) writers from West Texas which include Elmer Kelton, Kambri Crews, Carol Hall, and of course Me... Dan Dwayne Spencer author of "Spies Lie & Spies Die" and "The Secret King and Poetry of Praise." 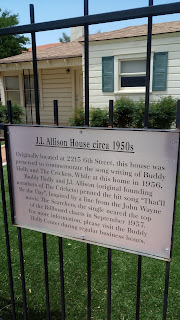 Posted by Dan-Dwayne Novelist at 11:03 AM