As High As They Will Go 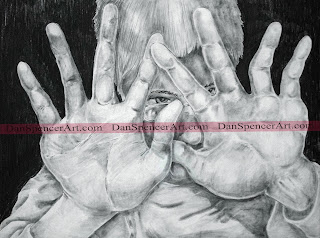 Title: As High As They Will Go
Media: Graphite
Artist: Dan-Dwayne Spencer

Dear Reader,
I'm sure that you are looking at this saying..."Dan-Dwayne I thought you were a better artist than that. those hands are way out of proportion." However, this is not the case. This is a drawing of one of my students who graciously posed for my art class. He was in a wheelchair and suffered from some kind of MS that caused his body to be out of proportion. I'm sure there are different kinds but I don't know which he had. I do know that people suffer greatly from it and it shortens their life... But frankly I don't understand why people must have such terrible afflictions... like MS, Cancer, Parkinson's, Dementia, or Alzheimer's. Anyway - Sorry, I strayed from my story... He loved art. He truthfully wasn't a craftsman and his art wouldn't be considered creative or clever but he loved the making and doing of it. Everyday he rolled in with his attendant to his assigned desk where his aide attached the desktop I made for him. He had special attachments connected to his paintbrushes and drawing tools so he could manipulate them with his contorted hands. They told me he wouldn't live to graduate, but they didn't know his powerful little spirit. I was very happy to know that he did graduate. In this picture he is raising his hands as high as he can. I've never made prints of this drawing and probably never will. Like this student... it is one of a kind.

In my story "A Deal of a Lifetime" which is in my book "Spies Lie and Spies Die" Ten year old Blair and his mother stop in a souvenir shop and buy what they believe to be a fake Pre-Columbian Idol. The thing turns out to be the real thing and the gangsters who stole it from the museum wants it back. He wants it bad enough to kill Blair and his mother to get it. To find out more read my book "Spies Lie and Spies Die."

Posted by Dan-Dwayne Novelist at 2:58 AM