Some things that are only imitations. 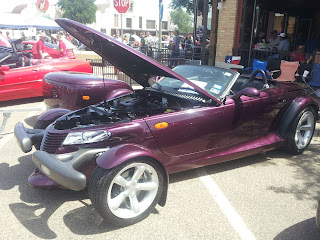 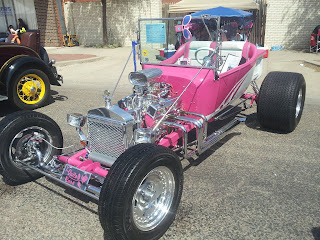 As you already know by reading my blog that I like to go to West Texas car shows. Pictured here are two very different cars. On the surface they look old and redesigned into hot rods, but that is only on the surface. The truth is that one is a rare off the showroom car designed to have that retro look and the other is pieced together with hours and hours of patients welding and sanding... bondo, paint, and ordering parts only to have them chromed by custom shops that specialize in plating and chroming. Now that I've told you about the differences I'm sure you have noticed which car is the retro designed one. Yes, it is a collectors item. It is called 'The Prowler' by the Chrysler Plymouth Corp. between the years of 1997 and 2002. The 1997 version in violet is worth about $47,000.00 today. (It was pretty pricy back when it was new.) Ok, That being said I want to make another comparison. In my book "The Secret King and Poetry of Praise" I have the Egyptians (my lead characters) hiding in the land of Israel. To escape the wrath of the evil Egyptian witch, they are pretending to be something they are not. The thing about 'The Prowler' is that one day it will not only be rare but it will become a true antique... something that the chopped rod will never attain.  In my book the impersonators pretend so well that they start to believe in the Hebrew God and they start to abide by the Hebrew laws... not because they must but because they want to. It becomes a choice for them to trust and believe in the one God. I know that this makes it sound like a religious story but it is really just an adventure story set in the bible days.
'The Secret King & Poetry of Praise' by Dan Dwayne Spencer   Available through Amazon.com

Posted by Dan-Dwayne Novelist at 6:39 PM