DNA and the Thunderbird 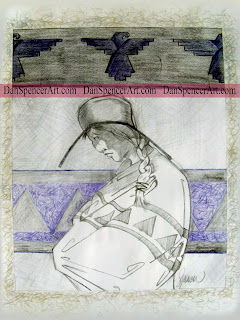 
I suppose many of you who have followed my posts realize that I have drawn several series themed with Southwest Native Americans. I grew up with the stories about how my family has Native American ancestors who didn't register with the tribes because of bigotry/ prejudice of the time period they lived in. Anyway, many of my Spencer relatives inherited the darker complexion and black hair. Not me... I took after my mother's side of the family and was fair skinned with reddish-brown (ok auburn) hair. I was looking at one of my cousins posts and she said that she had her DNA testing done (I've heard that is very and also not very reliable, depending on who you're talking to.) Her test showed 12% Native American. That really doesn't mean anything to anyone except the one tested because the Native counsels don't honor the testing. I just think it's cool to know your roots.

In my short story '421 Sierra Glen Drive' I created a Native American Detective who works out of Ruidoso, New Mexico. To find out what happens in that story you'll have to read my book 'Spies Lie and Spies Die.'

Posted by Dan-Dwayne Novelist at 5:54 AM