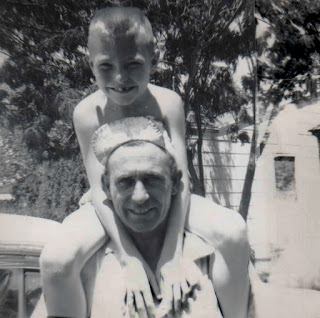 Father's day is coming up and this is a picture of me on my father's shoulders. I was nine... and at nine every boy has the desire to be exactly like their father. He was a mechanic. He didn't read fiction, but nightly he read his manuals on new advances in automobile transmissions, fuel injection, and other such stuff. Then before he went to bed he read his bible. It was always on his table by his recliner. I don't remember my mother being a reader. I can't remember her reading any book at all except cookbooks, however, she was the one who encouraged me to read. She bought me all kinds of historical and factual books. Most were about explorers or informative facts of some kind or some fashion. I remember reading parts of books from the elementary school library like Louis Carroll's 'Wizard of Oz,' and L. Frank Baum's 'Alice in Wonderland.' (I didn't read the whole thing... I usually skipped through to the next exciting part.) I think I was 11 years old when I actually finished a book completely.... reading it cover to cover. It was captivating. It was 'A Wrinkle in Time' by Madeleine L'Engle. I truly believe being a reader was a key part in my love of story telling. Because of my mother's encouragement I have all kinds of unless knowledge on all kinds of subjects. My father was the one who set the example. He was the one I saw reading. I think that is an important thing many of todays dads don't get... fathers set the example. In my story 'Deal of a Lifetime' in my book 'Spies Lie and Spies Die' the character of Blair is on his way to visit his grandfather. His mother and father have divorced and his mom feels that he needs a positive role model. Through the dialogue the reader learns that Blair admires his father. He thinks of his father as a great adventurer, and although he may not be a part of Blair's life that doesn't matter much (not that he shouldn't be a part of his life but Blair doesn't have any control of that) as long as he knows his father is an important person.