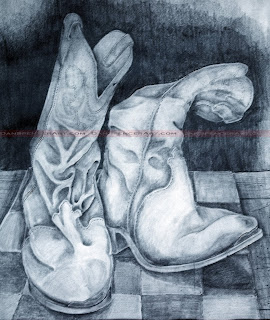 
Here in West Texas just about everyone knows how to Texas Two Step. It's like a Texas tradition. You're born... You learn to say Ya'll… you learn to walk and then you learn to dance the famous Texas Two Step. Somewhere in there you also learn to ride a horse. Well, some people do anyway. Actually I did most of my horse riding in my teens because today it's all Fords and Chevys. Okay, I'm being a little silly. I know you can't stereotype every Texan into that pattern... except for the 'saying Ya'll' part. But my point is that dancing the two step in the Texas honky-tonks really is something that people do. My drawing, which I showed you here, are my own boots. These old boots served me well until they were kinda floppy. They were more than dancing boots. They were the everyday, anytime wear, Sunday wear and playtime boots. Broken in, soft and comfy... but as all things do they got old, worn, stretched out and in the end they didn't fit right any more. In my story "Spies Die & Spies Lie" Richard Wallace, at flirty Cindy Clarkson's request, goes out drinking and dancing with his coworkers almost every night. It was his way to get close to the employees at Boden International and find out who and what was actually going on there. After all he was a spy for the NSA and he was spying on them.

Posted by Dan-Dwayne Novelist at 8:07 AM