Time to get plugged into the world of Evan Chavez.

Time to get plugged into the world of Evan Chavez. He is a second generation American who grew up in the tough city of Chicago and has roots that reach all the way to Puerto Rico. He enlisted in the Navy and soon became a Military Intelligence Special Service Operative. He was recruited into the most elite  and secretive team of Covert Operatives in the U.S. Military, Goldstein's Gorillas. Little is known about this elite team because of the National Secrets Act but recently some documents have been declassified. Those documents have been retrieved and provided here through the National Freedom of Information Act of 1967.

In 1989 the first official act of the new President, George H. W. Bush, was issued in secret. This secret mandate authorized the Pentagon to immediately create a team of elite covert operatives which would work for Navel Military Intelligence under the supervision of a Special Forces Colonel, one Matthew L. Goldstein. These elite Special Force operatives came to be called “Goldstein’s Gorillas” and could infiltrate foreign countries and extract specific individuals known to claim responsibility for terrorist acts against the United States. These files, once considered top secret, have since been declassified. Goldstein’s team operated from 1989 to 2017 after which Goldstein was promoted to General. He is now officially assigned to the Pentagon.
The original patches worn on the operative’s fatigues were round and portrayed a comical gorilla at the center. Goldstein thought that it wasn’t suitable. He believed it made the team appear inept and whimsical. He had the moniker changed in 1990 to a patch which displays a snake wrapped around a dagger. He was quoted as saying he felt it was more indicative of the squad’s commando spirit. This patch was worn by the very few who counted themselves as a part of Goldstein’s Gorillas, the most successful Special Forces team in U.S. history. Soon after its inception the team became the United States number one top secret asset.
Their military and political worth was in their ability to plan and execute missions that were considered by other military personal using standard practices, hopeless and impossible. Their success soon tagged Goldstein with the nickname ‘The Magician.”
The report states the team was many times issued orders (by whichever President occupied the oval office) to do surveillance and retrieve essential data. Initially in 1989 it was used to collect data about the involvement of countries, dignitaries, and individuals aligning themselves with Iraq before, during, and after the Gulf War. Pages of redacted text suggests they played a greater part in those countries than surveillance. Eric Chavez was one of these operatives who managed to leave military service and more. He found a new life as a police detective in the city of Fort Worth Texas. Once he constructed the intricate missions the Gorillas executed  but now, as a detective, he manages to think through the crimes like the master strategist he is and find the criminal. His is the thankless Job of solving the cases no one else could... he is in charge of the cold cases involving a murder. His cases are plagued by layers of dust and time which eats away at the evidence like rust on metal, however, he manages to solve an astonishing 70% of his cases.

Find out more about Evan Chavez in the novel 'Premeditated Pandemonium.' 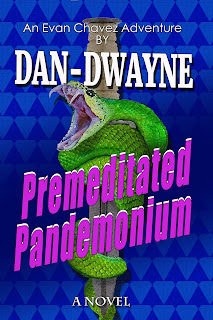 Posted by Dan-Dwayne Novelist at 2:41 AM