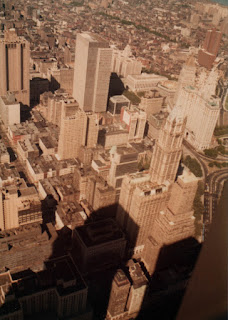 This might seem like it's just a tourist pic or another view of New York city. In fact I suppose it is a tourist pic as I took it with my instamatic camera. What makes this pic special is that I took it from the observation level of the World Trade Center Towers, floor 100 was called The One World Observatory I believe. You can see the shadow of the twin towers in the photo. That was a special trip... I think it was 1977 and the Youth Action Singers were on tour up the eastern sea coast which ended in various events hosted by churches in Queens and Brooklyn. I took a couple weeks off from University which resulted in my dropping a couple of classes and lowered my grade in others... but it was a fabulous trip. The return tour to Texas went through Saint Louis and down the Mississippi River. (Those were the days when I thought I could actually sing... LOL. I suppose I was decent enough for group choral,) It's ancient history now... Good times and great memories though. 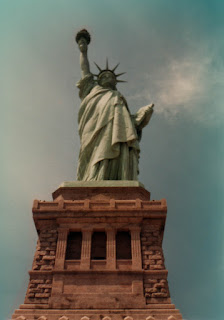 Posted by Dan-Dwayne Novelist at 10:19 AM