Art can be made of the simplest things. 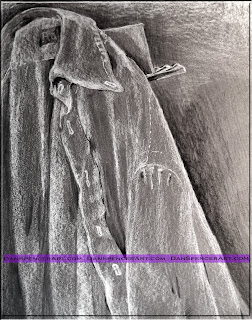 This drawing is a reminder that art can be made from the simplest things.  I had finished painting for the day and hung my painting shirt on the end of the easel I was using. (I have several.)  When I looked up, I felt challenged. The shirt was white and the only good drawing paper I had at the time was black. So, in the spirit of competition I set off to make the shirt look somewhat like a white shirt. The light was strong and the shadows were dark and deep. Much of the white shirt looked grey in the little side light I was using. When it was finished I knew it looked more like a grey shirt hanging on an easel than a white one. Oh well, I thought I was trying to be so faithful to record what I was seeing. When I compared my drawing to the shirt... I found that I had indeed made the contrast a bit higher than the original (hanging on the easel) and the drawing looked more like a white shirt on an easel than the shirt before me. I suppose that comes from having a mindset while I'm attempting a project. It will (at least a little bit) resemble the image in my mind rather than the one I see before me.
I think when I'm writing I do that with my characters too (and maybe that's a good thing.) I see and hear them in my head in a certain way. It's like they are a people and I'm trying to imitate them as I write. I only hope that I translate their uniqueness to the page. Anyway, I was reading a part of my new (soon to be released) novel to my sister and she stopped me and ask me if something was true about my female lead character. I was shocked because that is exactly how I was seeing her in my head.  It made me feel like I had succeeded in giving her more than a name and occupation. She was more to my sister than the words I had written. She had heard (since I was reading) between the lines and given the character more of the intended personality and physicality than I had completely described. She had picked up on my innuendos... my inferences. You should read one of my stories for yourself. There are 9 short stories in my latest publication "Spies Lie and Spies Die" and I'm sure you will like them. Remember they are all adventitious mystery stories. Some are even a little eerie. Hummm… How would I describe my more spooky tales? I'd describe them as Twilight Zone meets Agatha Christie. Well maybe...
Posted by Dan-Dwayne Novelist at 6:11 AM