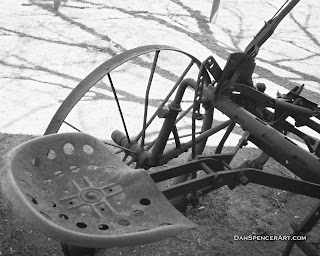 My mother told a story about how (in the 1930's) my grandfather went to the bank and borrowed the money for the next year. They had a good size farm... So, he would (and could) borrow enough money to buy seed to plant and then the rest would hold the family over till the crop came in. That money was for food, clothing (including fabrics), entertainment, and as for food it was to pay for the feed for the horses and the cows. He stopped by the seed store on the way home and bought the seed for the year's planting. Then he came home, changed out of his Sunday best (he had been to see the banker you know) into his work clothes and started seeding his land... Planting his crop. When he returned to the house he was going to show granny the money he had borrowed and that there was enough for them to live on till the harvest... but he couldn't find his billfold. It was gone. He went over his trip again. He looked everywhere and nothing was to be found. It was lost. It must have fallen out of his pocket. They had a hard season, needless to say. The next year he goes back to the bank. Gets the money for that year and stops by and gets the seed. He is very sure to keep a grip on his billfold this time. He gets home changes his clothes and starts plowing his fields. He is plowing when he sees something strange turn up as the earth is broken and the plowshare turns the soil. It was his billfold. That year they had money from the year before and the current year too. In my story "A Deal of a Lifetime" a fortune is dropped in Helen Baxter's lap by mistake. The scam artists misplaced the real statue and Helen accidently bought the priceless object. Of course no one came hunting my grandfather down for the money but have you ever tried to put off those bill collectors? They are the worst!