A Passage from 'Premeditated Pandemonium.'

A passage from 'Premeditated Pandemonium' by Dan-Dwayne:

Evan held the flight stick of the chopper steady as Zane leaped from the helicopter into the inky blackness that lay before him. Its tranquility surrounded him and enveloped him. It made him one with the night sky. On his cheeks, he felt splatters of moisture as he fell through a thin cloud and his mind drifted for a moment. *** This night he had to force his thoughts aside and concentrate on the mission at hand. At nine hundred and fifty feet, literally suspended between heaven and earth, it wasn’t the time for Zane to think of such things. On top of everything else, there was the bitter cold.

It was the cold that brought his focus back to his mission, his purpose. He had a job to do, and although his cheeks felt frozen as he hurtled through the black air of night between the helicopter and the top of the newly completed AWIF Corporation skyscraper, the jewel of the Boston skyline, he would persevere.

Holding tight to the ripcord of his parachute, he counted off the seconds before he opened it. It was only seconds but it felt like a perpetual eternity before he reached the precisely calculated distance when his parachute would not be noticed by the dual tower security team.

He whispered the number ‘0’ and pulled hard on the ripcord. The nylon cloth shot out of the tight packing and popped loudly as it suddenly filled with air. Zane flailed briefly like a rag doll as his momentum temporarily reversed and he began his gentle descent to the top of the tallest tower.

Landing with a roll, he stripped off the pack and tucked as much of the blowing fabric back into it as he could. Dressed in black fatigues, he pulled a ski mask over his face. Loose threads outlined where his rank and his Goldstein’s Guerrillas patch had once been attached to his shoulder.

With little time to spare he pressed the release button on the miniaturized collapsible grappling hook. The titanium tines of the hook sprang out into a claw shape. He secured the rope to the hook and anchored it to the massive air-conditioning unit that cooled the tower.

To find out how this fits into the plot read "Premeditated Pandemonium" on Amazon.com 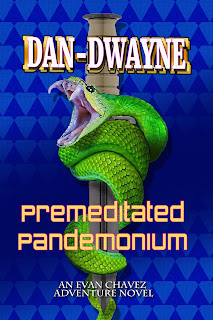 Posted by Dan-Dwayne Novelist at 8:05 PM