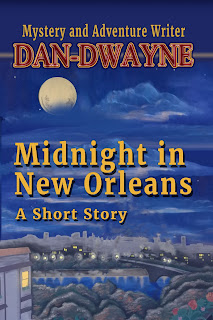 Hello All, I just finished a promotion deal with Amazon to give free e-copies of my short story who-done-it Midnight in New Orleans. That's right I said free. But, it's only for three days of frantic hand-outs. So, get yours Monday the 12th, Tuesday the 13th, and Wednesday the 14th of August.

This story starts when Michael and Alexis go to her home town, New Orleans, Louisiana, so that Michael can meet the parents of his dream girl. While they are out they learn about a séance being held to talk to the ghost of old Tom, a millionaire who hid his money. At the séance a man is mysteriously shot. No one knows where the bullet came from or who pulled the trigger. Now, Alexis and Michael find themselves in the middle of a murder investigation, but they have an advantage the police don't have... they have Madame Boudreaux, a gifted spiritualist who talks to the dead.

Posted by Dan-Dwayne Novelist at 12:40 PM